The 55-year-old actor, also known as the Badshah of Bollywood, has three kids with his wife Gauri Khan – Aryan, Suhana, and AbRam.

Arjun Rampal has been on the list of the hottest Bollywood dads for a while now. Arjun, 48, has two daughters with his ex-wife Mehr Jesia – Mahikaa and Myra. He also has a son with his girlfriend Gabriella Demetriades.

Married to Soha Ali Khan, Kunal Kemmu is one of the most Insta-famous dads because of his adorable daughter Inaaya Naumi Kemmu.

Although Imran Khan hasn’t been an active name in the world of Bollywood for quite some time, he is still one of the most adorable celebrity dads we know of. Imran has a daughter Imara, with his wife Avantika.

Who doesn’t know about Shahid Kapoor and his much-talked-about romantic wedding with Mira Rajput? The couple today has two children – Misha and Zain.

The jhakaas actor of Bollywood is not only one who turns younger each year but is also the father of three talented individuals – Sonam, Rhea, and Harshvardhan. He gives most celebrity dads a run for their money!

With his wife, Aishwarya Rai Bachchan, who was voted the most beautiful woman on earth, Abhishek Bachchan has one daughter – Aaraadhya.

Bollywood’s very first superhero, Hrithik Roshan has given Indian kids their own idol to look up to in the form of Krrish. The actor has two sons, Hridaan and Hrehaan, with former wife Sussanne Khan.

The ever-charming Saif Ali Khan is a father to four. With his former wife Amrita Singh, Saif Ali Khan has two children – Sara Ali Khan and Ibrahim Ali Khan. With Kareena Kapoor, Saif is father to Taimur, who has his own fan following as an adorable star kid, and another baby boy born in 2021.

Dhoni is not only India’s pride when it comes to our favourite sport but is also an amazing dad who cherishes every moment with his daughter Ziva.

The tennis legend is married to actor Lara Dutta with whom he has an adorable daughter, Saira. He is often seen as one of the most loveable celebrity dads. 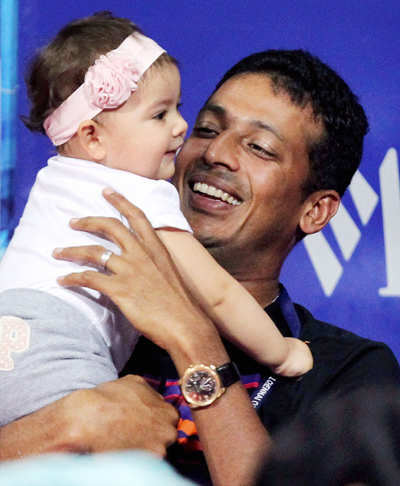 Get access to my latest recipes by joining the weekly newsletter